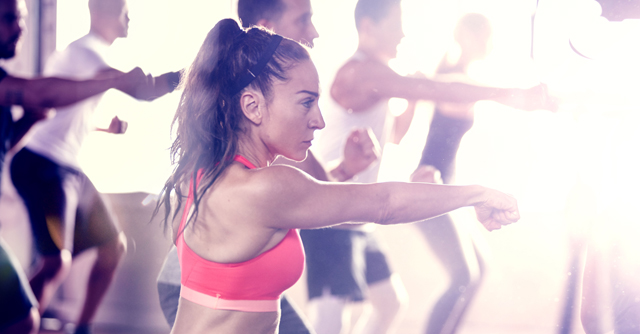 Whether you can believe it or not, the 4th month of 2017 is practically upon us! According to recent research, an impressive 58.4% of resolutions are maintained for more than one month. Whether or not your resolutions are still going strong, we’re checking in with one group who definitely stuck to theirs: the Elite Dailystaff.

A group of staff members at the millennial-approved site resolved to eat healthier and take up to 4 STRONG by Zumba® classes per week as part of the #STRONGer2017 Challenge. These guys and gals sweat, kicked, and punched their way through the last two months and now the results of their challenge are in. So, how did they do?

Michael started off the challenge resolving to work out more in order to make room for some of the cheat meals he can’t resist. Two months later he says, “STRONG by Zumba is such an important part of my week, and I have so much more energy because of it, that I won’t allow myself to miss a class.”

Jenna initially felt that working out with a friend would motivate her to hold tough poses for longer. And that motivation was totally worth it. “Having friends keep me accountable has definitely paid off in terms of results — I’ve noticed that my core and legs are so much stronger since starting the challenge, and I know it’s from sticking with my routine,” says Jenna.

Jamie was hesitant about trying any workout that had HIIT in its description. But now, she says, “The music and the moves in STRONG by Zumba don’t feel like any HIIT class I’ve ever taken before. And now that I’ve been doing SBZ for
a few months, I’m stronger, and I’ve noticed that my balance has improved from all the core work.”

Other staff members have noticed that their arms are more toned, that their backs hurt less when carrying their kids, and that they get less winded walking up the stairs in their apartment building.

Their bottom line is that they are hooked – even obsessed – and don’t have any intentions of dropping out of STRONG by Zumba classes anytime soon.

Did you follow the #STRONGer2017 Challenge? We want to know – what differences have you seen? Comment below.

This site uses Akismet to reduce spam. Learn how your comment data is processed.